Named by Outside Magazine as one of the 20 most dangerous trails in the world, the Kalalau Trail along the Na Pali coast on the island of Kauai, Hawaii, seemed like one for the bucket list. My son and daughter-in-law had backpacked the entire 22 miles shortly after their honeymoon and told us it was a tough trail. Surely, Tammy and I could tackle the first two miles to Hanakapiai beach!

Kauai, Hawaii is one of the most beautiful and wettest places in the world. Receiving 450 inches of rain a year, this tropical paradise is home to exotic flora and fauna and lots of red mud! No hill for a couple of climbers though! We laced up our Oboz hiking boots and threw our Paria Outdoor Products trekking poles in the backpack and headed out. Much to our dismay, when we arrived at Haena State Park, the trail was closed due to wildfires burning on the ridge above the trail. Who would have thought anything could catch on fire in this rainforest. Although it hadn’t reached the trail, park officials closed the Kalalau as a precautionary measure. Disappointed, we hoped that it would reopen over the next week. A couple of days later the trail did reopen and we threw the gear into the Jeep and headed for the Na Pali coast.

Because the trail had been closed for several days, it seemed like a lot a hikers were milling around when we pulled into the parking lot on Friday morning. Undaunted by the numbers, we figured it was a quick four miles and we would zip past the crowds and be back to the Jeep in time for an early lunch. That turned out to be wrong.
Our first clue should have been the string of hikers coming down the trail who looked like they had taken a mud bath! Our next clue came about 50 yards up the trail when a young lady covered in mud looked over at her husband with disgust after seeing our trekking poles and said, “Why don’t we have some of those?”

The trail winds up and down along the coast transected by a number of small streams cutting through jungle and then rises up to spectacular coastline views only to send you back down into the jungle before reaching Hanakapiai stream, which is large enough to make you think twice about boulder hopping across. I hopped across the rocks while some nice man acted as a human handrail for Tammy to step across the rocks.
Hanakapiai beach is a lovely tropical gem, half covered in smoothed black volcanic rock reaching out to clean khaki-colored sand. It’s an awesome place for lunch; unless you left yours in the Jeep! Turns out that we had spent 2.5 hours slipping and sliding along the trail and given the warm temperatures had almost exhausted two 32 oz. Hydroflasks. The Boy Scout motto was ringing in my head and we watched those more prepared enjoy lunch!
With a bit of rest, we gathered up our gear and I opted to wade across the stream providing some reassurance and a helping hand to Tammy as she cautiously navigated her way between the rocks. Occasional bursts of hot sun were drying up some of the trail and our mouths but we endured and thanks in large part to our trekking poles, managed to do the round trip without falling on our butts once! Throwing our wet gear and clothes in the Jeep, we devoured our turkey sandwiches, changed into swimsuits and spent the afternoon snorkeling at Ke’e beach.
If you go, wear hiking shoes and carry trekking poles and more water than we did! We saw lots of flip-flop casualties. Take a lunch and your time in one of the most beautiful spots on this earth!

Have you ever dreamed of walking on a deserted stretch of beach with your significant other? Tick that incredible box for me! My wife and I just returned from our first trip to Hawaii and I’m still in beach heaven. If you get a chance to visit Kauai, get yourself a Jeep and make your way to Polihale beach on Kauai’s southwest side. Stroll to your hearts content along this 7 mile stretch, and on most days, you won’t say hello to anyone! 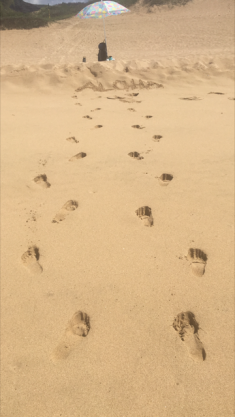 Polihale is the site of ancient Hawaiian temple ruins, originally constructed at a point over the ocean where Hawaiians believed the souls of the dead departed for Po, the underworld. It was otherworldly for us, far from the pace of our everyday life. It’s also otherworldly in the sense that it’s unlike much of Kauai, which is one of the rainiest spots on this earth, Polihale is hot and dry and seems like a place on the edge of the Sahara.

This is a place for long walks along the shore where dipping your toes in is more advisable than a full body immersion. Strong currents and big waves make for a tough swim but I could sit for hours watching the surfers ply their trade atop magnificent, rolling mountains of sea. Spend a few hours here and you will come away different. Walking on the edge of this underworld certainly made our world right again.

I live near The Woodlands, Texas and enjoy an active lifestyle in the outdoors!